Oh look, my first post! I’ll try not to screw it up by starting with something easy that I like to make for lunch. I’m big into lunch foods because… Well, if you’ve ever worked a 9-5 I’m sure you understand how big of a difference lunch makes in your day. And, if you’ve ever lived in New York (I’m a 7 year veteran), I’m sure you understand my unwillingness to buy lunch, because a $10 salad is just nuts. SO I always make lunch but prefer not to have to do it EVERY night, and so I like to make a big batch of something substantial at the beginning of the week that I can eat by itself, over greens, throw an egg on, or do other things with depending on what it is. (I’m no longer in New York or on the 9-5 grind, but still too stubborn to buy lunch.)

This quinoa, black bean and squash salad is fantastic for this because theres so much good, substantial stuff in it to keep the afternoon hunger away, it’s real easy, and it’s colorful and beautiful. Yeah, just try being grumpy looking down at that on your plate. You can’t.

I first made this because I had a bunch of black beans. I buy dried beans because it’s a huge money-saver for a little extra work, so I always end up with a ton of whatever bean I bought that week. And I went through a butternut squash phase a while back, because they are big, usually inexpensive and you can stretch them a long way.

Also, tomatoes are a top contender for my favorite food. 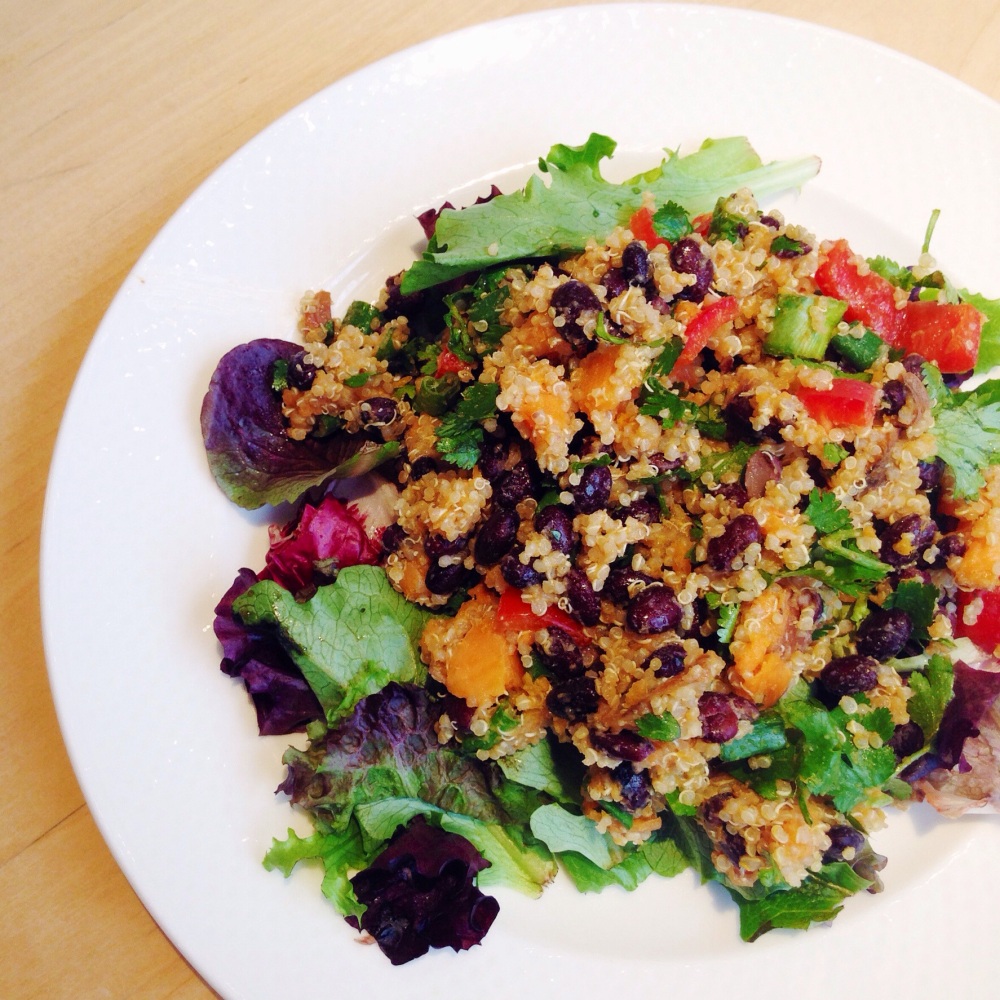 Dried black beans (however much you want, should probably just make a bunch and use the rest in other stuff. I usually do half a bag at a time.)

Cumin and pepper for seasoning

Well first of all you’re going to need to soak the dried black beans overnight or the day before if you’re on top on life. Just put them in a big bowl with a pretty large amount of water. Leave them for at least 8 hours, then rinse them and boil them in a big pot on the stove until cooked – about an hour depending on how high you crank the heat. Then let them cool and boom you have cooked beans, no cans involved.

On to the salad. Cook the quinoa – and yeah, rinse the quinoa so it doesn’t taste bitter. Put the quinoa and water (one cup quinoa to two cups water) in a pot and cook until all the water has absorbed, which will take 15ish minutes. Let cool.

Chop the butternut squash into cubes while that’s going on and steam it in the microwave (put in bowl with a small bit of water in the bottom, cover and zap for about 5 minutes, then stir) or steam on the stove if you like washing extra pots (or if you have a dishwasher. Sigh) and then put it aside.

Once the quinoa has cooled, throw it into a big mixing bowl and add the black beans as well. Chop the tomatoes to your preferred size and throw those in too. Thinly slice the green onion and finely chop the cilantro and put those in too – maybe not all of both at first, try 2/3 the amount and taste it at the end to see if you want more. I found the spring onion overpowering the first time I did it and tried to pick some back out – not flipping easy.

Half a lime and squeeze the juice from half into the mix, drizzle with olive oil and then shake in some cumin and pepper. Same goes for these seasonings. It’s always easier to add more than to take some out.

By this time the squash should be cool enough so toss that in as well and mix the whole thing up. Taste and adjust as you want.

That’s it! Cover the big bowl and stick in the fridge. I like it over greens to add more green stuff to the meal, but do it however you want. If you’re lazy like me, put it in a giant tupperware and bring that and a bag of greens to work on Monday and leave it in the fridge so it’s there ready for you to make up a plate each day.

Alright, so lunch is taken care of. But now you have a bunch of stuff left over you didn’t use, and it would be a shame for it to sit in the fridge getting sad. So here are some ideas: